We hope you enjoy our latest Camp Video. It’s a collaboration between our very talented campers and staff, and a wonderful professional camera crew.  Much like everything we do at Camp Kennebec, we felt that the making of a camp video should be a camp-wide project and include as many Kennebecers as we could.

A special thank you to everyone involved in the making of our camp video including:

Film making is a very popular activity at camp.  With Go Pros, digital, and video cameras, many of our campers spend hours per week shooting and learning about making and editing movies.  In fact, one of our campers, Jack B. has been working on his own feature length film at camp for a number of years.  Each summer at camp, he carefully plans his shots, invites campers to act in his movie and then screens his film for camp to see. If you watch our camp video carefully, you will see that we’ve incorporated footage that our campers shot during our Bon Echo trip and at other activities and special events around camp.

It was so much fun to see how excited and helpful our junior Speilbergs and Scorceses were.  In fact, the professional videographers encouraged several of our campers, like Jeremy T., to take the craft of film-making seriously, as they showed considerable talent!

So we hope that you enjoy our camp video and through it, are able to experience the Kennemagic you hear our staff and campers talk about in the video.  As always, if you have any questions about camp, please don’t hesitate to contact us at info@campkennebec.com or call us at (613) 335-2114. 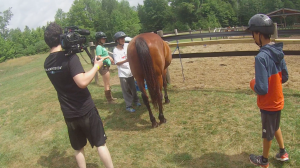 Connect with us on Social Media